If you had been an heir of the estate of Don Francisco Muñoz Carillo, a nobleman from Cuenca, Spain, who died in 1687, you may have received some of these items. However, before you get too excited, you would have also inherited the many debts that Don Francisco left his heirs.

Translating Don Francisco’s will—a document held in University of Iowa Special Collections—was the focus of the first Meet the Manuscript workshop, held in late May 2016. The paleography workshop was organized by Heather Wacha, a 2016 Obermann Graduate Fellow and a newly graduated PhD in History, and Patricia Gonzalo de Jesús, a PhD candidate in Spanish & Portuguese. The two intend to make Meet the Manuscript an annual event at which undergraduate and graduate student participants from the UI and surrounding community will help prepare a manuscript for online publication.

“I have participated in the Middle French Paleography Workshop at Columbia University for the last three years, which is part of Making and Knowing project,” says Wacha of her inspiration for the workshop. That group has been crowdsourcing the transcription and translation of a 16th-century Book of Secrets, which describes art and craft methods that were popular during that time.

Wanting to highlight a holding from the UI’s Special Collections, she selected Don Francisco’s will in part because of the multiple ways and audiences it might serve, including scholars of economic history, early modern Spanish history, social history, and the history of women, as well as high school students and the general public. In addition to the UI students who participated in the weeklong workshop, Wacha partnered with an art class at Norwalk High School in Norwalk, IA; a history class at Kennedy High School in Cedar Rapids, IA; and a Spanish class at Central Academy in Des Moines, IA. The students worked with the manuscript and editing process to create their own artistic, linguistic, and historical interpretations.

One of Wacha’s aims with all of her work is to get original documents into the hands of students, both high schoolers and college students. She taught high school French for nearly twenty years and also taught undergraduates during as a PhD candidate. “Students are accessing primary sources in these annotated, edited, and translated versions. They have no sense of what the original documents look like,” she says. “When I take classes to Special Collections, it makes such a big impact. First of all, they just think the materials are cool! But they also start to understand that there is no barrier to them accessing these materials; they are available to everyone.” 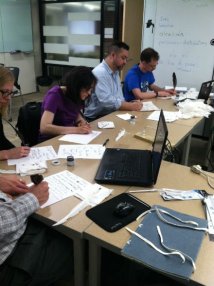 There were eight active participants in the two-week Meet the Manuscript workshop, hailing from Religious Studies, Education, the Translation MFA program, and more.

“I was drawn to participate in the workshop by the explicitly collaborative nature of the project as related to manuscript studies,” says Ben Schmidt, a graduate student in the School of Library and Information Sciences and an Obermann HASTAC Scholar. “It seemed like an interesting model for working with manuscripts in a Digital Humanities environment.”

Like many of the participants, Schmidt brought a skill to the table; he guided and corrected the TEI (Text Encoding Initiative) of the other workshop members. “We needed to ensure that the encoding of the translated and transcribed manuscript was successful and could be used to begin the creation of a digital edition for the manuscript,” he says.

The workshop included sessions with papermaker Tim Barrett, book binder Melissa Moreton, and calligrapher Cheryl Jacobsen, all of the Center for the Book. Participants cut their own quill pens and bound their own books. Each step helped workshop members better understand what went into the making of the will and how it can best be transformed into an online digital edition and resource tool.

Next summer’s Meet the Manuscript workshop will again focus on Don Francisco’s will with new participants finishing the work begun by the inaugural group. Wacha says to look for the call for participation on the project web site. She also hopes to find ways to combine the collegiate and high school students. While it was powerful for the high school students to be exposed to materials from Special Collections, it is also an eye opening experience for many of them to be on a university campus and working with scholarly materials and ideas.

Wacha fine-tuned her ideas for the workshop during last January’s Graduate Institute, including creating a short project pitch film that she used to recruit high school partners. A former high school French teacher, she understood the importance of helping teachers fully understand the benefits of the project to them and their students.

In the fall, Wacha will be at the University of Wisconsin in Madison, where she has accepted a Mellon-funded CLIR-DFL Postdoctoral Fellowship in Data Curation for Medieval Studies.